Mark the letter A, B, C, or D on your answer sheet to indicate the most suitable response to complete each of the following exchanges

A. You shouldn’t do that.

Question 6: Hanna and Jenifer are talking about the book they have just read.

-Hanna: “The book is really interesting and educational.”

Mark the letter A, B, C, or D on your answer sheet to indicate the word(s) OPPOSITE in meaning to the underlined word(s) in each of the following questions.

Question 7: My little daughter would spend an inordinate amount of time in the shop, deciding which goods she was going to buy.

Question 8: Because Jack defaulted on his loan, the bank took him to court.

A. was paid much money

B. had a bad personality

Mark the letter A, B, C, or D on your answer sheet to indicate the word(s) CLOSEST in meaning to the underlined word(s) in each of the following questions.

Question 9:I think we can safely say now that we have got our money back because we are home and dry.

A. have got no water

B. have been successful

C. have got home dry

D. have not got wet

Question 10: He drives me to the edge because he never stops talking.

Question 11: Food prices have raised so rapidly in the past few months that some families have been forced to alter their eating habits.

Question 12: Having finished his term paper before the deadline, it was delivered to the professor before the class.

C. it was delivered

Question 13: Among the people present at the bar, the police suspected a thirty-years-old man.

B. present at the bar

Question 14: Had she read the reference books, she would have been able to finish the test.

A. If she had read the reference books, she could finish the test.

B. Because she read the reference books, she was able to finish the test.

C. Although she didnt read the reference books, she was able to finish the test.

D. Not having read the reference books, she couldnt finish the test.

Question 15: My advice is that you get straight to the point in the next report.

A. If I were you, I would go straight to the bush in the next report.

B. If I were you, I would have the next report got started.

C. If I were you, I would not beat around the bush in the next report.

D. If I were you, I would not point out the next report.

Question 16: Tim graduated with a good degree. He joined the ranks of the unemployed.

A. Tim joined the ranks of the unemployed because he graduated with a good degree.

B. If Tim graduated with a good degree, he would join the ranks of the unemployed.

C. Though Tim graduated with a good degree, he joined the ranks of the unemployed.

D. That Tim graduated with a good degree helped him join the ranks of the unemployed.

Question 17: The family find it difficult to manage on the money they have.

A. It is difficult for the family to get by on the money they have.

B. The family could manage on the money they have.

C. It is difficult for them to earn money.

Question 18: It is said that he has broken several world records.

A. People said that he has obtained several world records.

B. He said to have broken several world records.

C. It is said that several world records has been destroyed by him.

D. He is said that he has broken several world records.

Mark the letter A, B, C, or D on your answer sheet to indicate the correct answer to each of the following question

Question 21: In England, English, Math and Science are_______ subjects at school.

Question 23: Tim’s doctor advised him to ______ smoking because of his health.

Question 24: The Lake District, ______ was made a national park in 1951, attracts a large number of tourists every year.

Question 27: Dont ___ to conclusions; we dont yet know all the relevant facts.

Read the following passage and mark the letter A, B, C, or D on your answer sheet to indicate the correct answer to each of the questions from 31 to 35.

Although most universities in the United States are on a semester system, which offers classes in the fall and spring, some schools observe a quarter system comprised of fall, winter, spring, and summer quarters. The academic year, September to June, is divided into three quarters of eleven weeks each beginning in September, January, and March: the summer quarter, June to August, is composed of shorter sessions of vary length.

There are several advantages and disadvantages to the quarter system. On the plus side, students who wish to complete their degrees in less than the customary four years may take advantage of the opportunity to study year round by enrolling in all four quarters. In addition, although most students begin their programs in the fall quarter, they may enter at the beginning of any other quarters. Finally, since the physical facilities are kept in operation year round, the resources are used effectively to serve the greatest number of students. But there are several disadvantages as well. Many faculties complain that eleven-week term is simply not enough fothem to cover the material required by most college coursed. Students also find it difficult to complete the assignments in such a short period of time.

In order to combine the advantages of the quarter system with those of the semester system some colleges and universities have instituted a three-term trimester system. In fourteen weeks, faculty and students have more time to cover material and finish course requirements, but the additional term provides options for admission during the year and accelerates the degree programs for those students who wish to graduate early.

Question 31: Which of the following would be the best title for this passage?

A. The Semester System

B. The Academic Year

C. Universities in the United States

Question 32: How many terms are there in a quarter system?

Question 34: When many students begin studying in a school that uses a quarter system?

A. Summer semester only

B. at the beginning of the academic year

C. at the beginning of any quarter

Question 35: Which of the following characteristics does NOT apply to trimesters?

A. They last eleven weeks

B. They allow students to graduate early

D. They are long enough to cover the course material

Read the following passage and mark the letter A, B, C, or D on your answer sheet to indicate the correct answer to each of the questions from 36 to 40.

Upon the creation of the United States, one of the core concepts on which the hopes for the new democracy were pinned was the ideal that its citizens would be enlightened individuals with clearly articulated rights and the opportunity for individual achievement and education. It was believed that in a free nation where the power belongs to the people, the commitment to education defines the progress of that democracy and is the catalyst for future progress. This core value has not only stood the test of time but has also grown in importance. In this new Information Era and international economy, education is an increasingly vital commodity, a precursor of potential success and a driving force of chance. It is importance to recognize, however, that we approach education today differently than in the past, partly because the kinds of jobs people had didn’t require the kind of basic education and specialized training that is often required in the workforce today. In the 1950s, for instance, only 20 percent of American jobs were classified as professional, 20 percent as skilled; and 60 percent as unskilled. Today, our world has changed. The proportion of unskilled jobs has fallen to 20 percent, while jobs now account for at least 60 percent of the workforce. Even more important, almost every job today increasingly requires a combination of academic knowledge and practical skills that require learning throughout a lifetime.

A. without education, no changes could have happened in American society so far.

B. the government of the United States wants to drive social changes in their own ways.

C. education has helped to bring about and orient most changes in the American workforce.

D. any American citizen who wants to change his driving license must be very well-educated.

Question 37: The passage shows the percentage of jobs that require higher training in the US ..........between 1950s and now.

A. has remained the same

B. has changed dramatically

C. has been reversed

A. always appear brilliant-looking in public

B. have often been well-exposed to light

C. have acquired an adequate level of education

A. know well all his/her rights and be ready to grasp his/her opportunity of success in life

B. study carefully the history of American educational and vocational systems even since their creation

D. move actively forward in the new Information Era and international economy with a prestigious diploma

Question 40: Which of the following titles would be best for the passage?

A. Education and Jobs in the Past and at Present in the United States.

B. The Significant Role of Education in American Citizens’ Careers

D. Recent Changes of Educational and Vocational Systems in America

Read the following passage and mark the letter A, B, C, or D on your answer sheet to indicate the correct word or phrase that best fits each of the numbered blanks from 41 to 50.

HOW TRANSPORTATION AFFECTS OUR LIFE?

Transportation also (46) ……….our lives in other ways. Transportation can speed a doctor to the (47) ……of a sick person, even if the patient lives on an isolated farm. It can take police to the (48 ) ….of a crime within moments of being notified. Transportation (49) ….teams of athletes to compete in national and international sport contests. In time of (50) ……….transportation can rush aid to person in areas stricken by floods, famines and earthquakes. 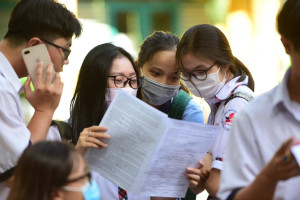 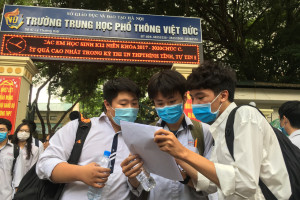 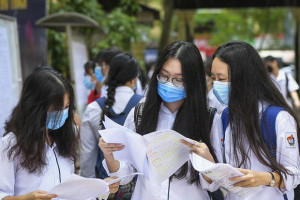