Mark the letter A, B, C or D on your answer sheet to indicate the word whose underlined part differs from the other three in pronunciation in each of the following question.

Mark the letter A, B, C or D on your answer sheet to indicate the word which is stressed differently from the rest.

Mark the letter A, B, C or D on your answer sheet to indicate the most suitable response to complete each of the following exchanges.

Question 5: Mai is talking to Suán

- Mai: “Our living standards have been improved greatly.”

A. Thank for saying so

B. Sure. I couldn’t agree more

Question 6: Cynthia and Victor are talking about their plan:

Cynthia: “Hi, Victor. Do you think it’s possible for us to have a talk sometime today?”

C. it has a pretty tight schedule today.

Mark the letter A, B, C, or D on your answer sheet to indicate the word or phrase that is CLOSEST in meaning to the underlined part in each of the following questions.

Question 7: She got up late and rushed to the bus stop.

Question 8: School uniform is compulsory in most of Vietnamese schools.

Mark the letter A, B, C, or D on your answer sheet to indicate the word or phrase that is OPPOSITE in meaning to the underlined part in each of the following questions.

Question 9: I must have a watch since punctuality  is imperative in my new job.

Question 10: When he passes the entrance exam, his parents will be walking on the air.

Mark the letter A, B, C or D on your answer sheet to indicate the best answer to each of the following questions.

A. have been arguing

B. had been arguing

Question 14: _________ back to her hometown, Julia Robert found everything new and attractive.

B. On she arrives

C. to be treated

Question 19: The player’s protests _________ no difference to the referees decision at all.

Question 20: The job requires certain _________. You have to be good at operating computers and dealing with people.

Question 21: It was ________ easy for him to learn baseball because he had been a cricket player.

Question 23: It is estimated that about 640 women remain illiterate in the world, mostly in _______ developing countries.

Reading the following passage and mark the letter A,B,C or D on your answer sheet to indicate the correct answer to each of the questions from 1 to 8.

You can usually tell when your friends are happy or angry by the looks on their faces or by their actions. This is useful because reading their emotional expressions helps you to know how to respond to important situations and to convey our intentions to others. But does raising the eyebrows and rounding the mouth say the same thing in Minneapolis as it does in Madagascar ? Much research on emotional expressions has centered on such questions.
According to Paul Ekman, the leading researcher in this area, people speak and understand substantially the same “facial language”. Studies by Ekman’s group have demonstrated that humans share a set of universal emotional expressions that testify to the common biological heritage of the human species. Smiles, for example, signal happiness and frowns indicate sadness on the faces of people in such far-flung places as Argentina, Japan, Spain, Hungary, Poland, Sumatra, the United States, Vietnam, the jungles of New Guinea, and the Eskimo villages north of Artic Circle. Ekman and his colleagues claim that people everywhere can recognize at least seven basic emotions : sadness, fear, anger, disgust, contempt, happiness, and surprise.

There are, however, huge differences across cultures in both the context and intensity of emotional displays – the so-called display responses – expecially negative ones – while many American children are encouraged to express their feelings more openly. Regardless of culture, however, emotions usually show themselves, to some degree, in people’s behavior. From their first days in life, babies produce facial expressions that communicate their feelings.
The ability to read facial expressions develops early, too. Very young children pay close attention to facial expressions, and by age five, they nearly equal adults in their skill at reading emotions on people’s faces. This evidence all points to a biological underpinning for our abilities to express and interpret a basic set of human emotions. Moreover, as Chales Dawin pointed out over a century ago, some emotional expressions seem to appear across species boundaries. Cross-cultural psychologists tell us that certain emotional responses carry different meanings in diferrent cultures. For example, what emotion do you suppose might be conveyed while sticking out your tounge ? For American, this might indicate disgust, while in China it can signify surprise. Likewise, a grin on an American face may indicate joy, while on a Japanese face it may just as easily mean embarrassment. Clearly, culture influences emotional expressions.

A. human habit of displaying emotions

B. a review of research on emotional expressions

Question 27: Many studies on emotional expressions try to answer the question whether _________

A. raising the eyebrows has similar meaning to rounding the mouth

B. raising the eyebrows has similar meaning to rounding the mouth

D. eyebrow raising means the same in Minneapolis and Madagascar

Question 28: Paul Ekman is mentioned in the passage as an example of ______

A. investigators on universal emotional expressions

B. researchers who can speak and understand many languages

B. are universal expressions across cultures.

C. do not convey the same emotions in various cultures.

D. are not popular everywhere

Question 30: Unlike American children, Asian children are encouraged to______.

A. display their emotions openly.

B. change their behaviour.

A. the fact that children can control their feelings

C. a biological underpinning for humans to express emotions

D. the fact that children are good at recognizing others’ emotions

Mark the letter A, B, C or D on your answer sheet to indicate the underlined word or phrase in each sentence that needs correcting.

Question 33: John composes not only the music, but also sings the songs for the major Broadway musicals.

A. composes not only

Question 34: Make sure that you have the words spell correctly, otherwise your form won’t be accepted.

Question 35: Our neighbor is quite safe because there have not been many crimes recently.

Mark the letter A, B, C or D on your answer sheet to indicate the sentence that is closest in meaning to each of the following question.

Question 36: It would have been better if he had told us his new address.

A. He might have told us his new address.

B. He should have told us his new address.

C. He shouldn’t have told us his new address.

D. It doesn’t matter that he didn’t tell us his new address.

Question 37: She knows more about it than I do

A. I know as much about it as she does.

B. She know as much about it as I do.

C. I don’t know as much about it as she does.

Question 38: “Why don’t you participate in the volunteer work in summer?”, said Sophie.

A. Sophie suggested me to participate in the volunteer work in summer.

B. Sophie asked me why not participate in the volunteer work in summer.

C. Sophie suggested my participating in the volunteer work in summer.

D. Sophie made me participate in the volunteer work in summer.

Mark the letter A, B, C or D on your answer sheet to indicate the correct sentence that best combines each pair of sentences in the following questions.

Question 39: We arrived at the airport. We realized our passports were still at home.

A. It was until we arrived at the airport that we realized our passports were still at home.

B. We arrived at the airport and realized that our passports are still at home.

C. Not until had we arrived at the airport, we realized our passports were still at home.

D. Not until we arrived at the airport did we realize that our passports were still at home.

Question 40: Nam was so rude to them last night. Now he feels regretful.

A. Nam regrets to have been so rudeto them last night.

B. Nam regrets having so rude to them last night.

C. Nam wishes he hadn’t been so rude to them last night.

D. Nam wishes he weren’t so rude to them last night.

Read the following passage and mark the letter A, B, C or D on your answer sheet to indicate the correct word for each of the blanks from 41 to 45.

Here are the tips that help success in your job interview

Always arrive early. If you do not know ____(41)_____ the organization is located, call for exact directions in advance. Leave some extra time for any traffic, parking, or unexpected events. If you are running late, call right away and let someone know. The best time to arrive is approximately 5 - 10 minutes early. Give yourself the time to read your resume one more time, to catch your breath, and to be ready for the interview. Once you are at the office, treat everyone you encounter with respect. Be ____(42)_____  to everyone as soon as you walk in the door. Wear a professional business suit. This point should be emphasized enough. First ____(43)_____ are extremely important in the interview process. Women should notwearing too much jewelry or make up. Men should ____(44)_____ flashy suits or wearing too much perfume. It is also important that you feel comfortable. While a suit is the standard interview attire in a business environment, if you think it is an informal environment, call before and ask. ____(45)_____, you can never be overdressed if you are wearing a tailored suit.

Read the following passage and mark the letter A, B, C or D on your answer sheet to indicate the best answer for each question from 46 to 50.

Successful students often do the followings while studying. First they have an overview before reading. Next, they look for important information and pay greater attention to it (which often needs jumping forward or backward to process information). They also relate important points to one another. Also, they activate and use their prior knowledge. When they realize that their understanding is not good, they do not wait to change strategies. Last, they can monitor understanding and take action to correct or “ fix-up” mistakes in comprehension.

Conversely, students with low academic achievement often demonstrate ineffective study skills. They tend to assume a passive role in learning and rely on others(e.g, teachers, parents) to monitor their studying. For example, low-achieving students often do not monitor their understanding of content, they may not be aware of the purpose of studying, and their show little evidence of looking back, or employing “fix-up” strategies to fix understanding problems. Students who struggle with learning new information seem to be unaware that they must extent beyond simply reading the content to understand and remember it. Children with learning disabilities do not plan and judge the quality off their studying. Their studying may be disorganized. Students with learning problems face challenges with personal organization as well. They often have difficulty keeping track of materials and assignments, following directions, and completing work on time. Unlike good student who employ a variety of study skills in a flexible yet purposeful manner, low-achieving students use a restricted range of skills. They can not explain why good study strategies are important for learning, and they tend to use the same, often ineffective, study approach for all learning tasks, ignoring task content, structure of difficulty.

Question 46: What is the topic of the passage?

A. Successful and low-academic achieving students.

B. Successful learners and their learning strategies.

Question 48: According to the passage, what can be learnt about passive students?

A. They depend on other people to organize their learning.

B. They are slow in their studying.

C. They monitor their understanding.

D. The know the purpose of studying.

Question 49: According to the passage, to learn new ìnormaton, low-achieving students do NOT________.

A. just understand it

B. relate it to what they have known

Question 50: The underlined pronoun “They” in the last sentence refers to________ 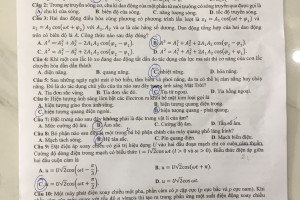