Mark the letter A, B, C, or D on your answer sheet to indicate the word whose underlined part differs from the other three in pronunciation in each of the following questions

Read the following passage and mark the letter A, B, C, or D on your answer sheet to indicate the correct word or phrase that best fits each of the numbered blanks 3 - 7.

Why do people often get uptight and worried before meeting someone for the first time? It is often said that (3)______a good first impression is very important, and according to recent studies, it appears that there is something to it. In his book, Blink, author Malcolm Gladwell says that we form an opinion of someone in the first 2 seconds after meeting them. In other words, if Gladwell is right, most of us pass (4)______on people we meet almost immediately. It makes (5)______that we create a better first impression when we‟re friendly. A warm smile can really make a difference.

And then if we have interests (6)______common, the other person may feel they want to get t know us. However, when we meet someone from abroad who (7)______ a foreign language, there‟s no need we have to keep our distance from them. If we decided to take the trouble to communicate, we might make a new friend.

Read the following passage and mark the letter A, B, C, or D on your answer sheet to indicate the correct answer to each of the questions 8 - 15.

In the 1960s, The Beatles were probably the most famous pop group in the whole world. Since then, there have been a great many groups that have achieved enormous fame, so it is perhaps difficult now to imagine how sensational The Beatles were at that time. They were four boys from the north of England and none of them had any training in music. They started by performing and recording songs by black Americans and they had some success with these songs. Then they started writing their own songs and that was when they became really popular. The Beatles changed pop music. They were the first pop group to achieve great success from songs they had written themselves. After that it became common for groups and singers to write their own songs. The Beatles did not have a long career. Their first hit record was in 1963 and they split up in 1970. They stopped doing live performances in 1966 because it had become too dangerous for them – their fans were so excited that they surrounded them and tried to take their clothes as souvenirs! However, today some of their songs remain as famous as they were when they first came out. Throughout the world many people can sing part of a Beatles song if you ask them.

Question 8: The passage is mainly about

A. How the Beatles became more successful than other groups

B. Many people‟s ability to sing a Beatles song

C. The Beatles‟ fame and success

D. Why the Beatles split up after 7 years

Question 9: The four boys of the Beatles

A. Received good training in music

B. Came from a town in the north of England

C. Came from the same family

D. Were at the same age

Question 10: The word “sensational” is closest in meaning to

Question 11: The first songs of the Beatles were……..

A. Paid a lot of money

B. Written by black Americans

C. Broadcast on the radio

D. Written by themselves

Question 12: What is not true about the Beatles?

A. They were afraid of being hurt by fans

B. They became famous when they wrote their own songs

C. The members had no training in music

D. They had a long stable career

Question 13: The Beatles stopped their live performances because

A. They were afraid of being hurt by fans.

B. They did not want to work with each other

C. They spent more time writing their own songs

D. They had earned enough money

Question 14: The word “they” is closest in meaning to

Question 15: What word might describes the attitudes of the writer?

Read the following passage and mark the letter A, B, C, or D on your answer sheet to indicate the correct answer to each of the questions 16 - 22.

Rainforests make up only a small part of the Earths surface, about six percent. They are found in tropical parts of the world. The largest rainforest in the world is the Amazon in South America. The Amazon covers 1.2 billion acres, or almost five million square kilometers. The second largest rainforest is in Western Africa. There are also rainforests in Central America, Southeast Asia, Northeastern Australia, and the Pacific Islands Rainforests provide us with many things. In fact, the Amazon Rainforest is called the "lungs of our planet" because it produces twenty percent of the worlds oxygen. One fifth of the worlds fresh water is also found in the Amazon Rainforest. Furthermore, one half of the worlds species of animals, plants, and insects live in the Earths rainforests. Eighty percent of the food we eat first grew in the rainforest. For example, pineapples, bananas, tomatoes, corn, potatoes, chocolate, coffee, and sugar all came from rainforests. Twenty-five percent of the drugs we take when we are sick are made of plants that grow only in rainforests. Some of these drugs are even used to fight and cure cancer. With all the good things we get from rainforests, its surprising to find that we are destroying our rainforests. In fact, 1.5 acres, or 6,000 square meters, of rainforest disappear every second. The forests are being cut down to make fields for cows, to harvest the plants, and to clear land for farms. Along with losing countless valuable species, the destruction of rainforests creates many problems worldwide. Destruction of rainforests results in more pollution, less rain, and less oxygen for the world

Question 16: What is the passage mainly about?

A. Kinds of forests.

B. Facts about rainforests

C. How much oxygen rainforests make.

D. Where rainforest are located.

Question 17: According to the passage, rainforests provide human all of the following EXCEPT?

A. Drugs used to fight and cure cancer.

Question 18: Why is Amazon Rainforest called “Lungs of the planet”?

A. It provides much of our air.

B. It helps circulation.

C. It uses much of the world’s oxygen.

D. It helps us breathe.

Question 19: Where would you find the largest rainforest in the world?

B. in South America.

Question 22: What is the most likely reason why the author is surprised that we are destroying rainforest?.

A. It will be too difficult to grow food without them.

B. They are necessary for the health of our planet.

C. They are necessary for the fight against cancer.

D. It will be too expensive to replant them.

Mark the letter A, B, C, or D on your answer sheet to indicate the word(s) CLOSEST in meaning to the underlined word(s) in each of the following questions

Question 23: Our new teacher You shouldnt wear casual clothes to an interview.

Question 24: Creating a good impression on the interviewer is very important.

Mark the letter A, B, C, or D on your answer sheet to indicate the most suitable response to complete each of the following exchanges.

A. where we would meet him

B. we would be able to meet him where

C. where would be able to meet him

D. where could we meet him

Question 27: Billy has been seriously ill, and he was taken to _____ hospital yesterday

A. are you going

B. would you go

D. will you go

A. got / had been waiting

B. got / was waiting

C. will get / has been waiting

Question 32: In the last hundred years, traveling___________ much easier and more comfortable.

Question 34: It gets _______ to understand what the professor has explained.

A. more difficult than

B. difficult more and more

Question 35: You would rather ___ talking in class so as not to make your teacher angry.

Mark the letter A, B, C, or D on your answer sheet to indicate the sentence that is closest in meaning to each of the following questions

Question 37: The leader went so fast that no one could keep up with him.

A. I wish the leader could not have kept up with us.

B. If the leader hadn’t gone so fast, we could have kept up with him.

C. If only the leader had gone faster.

D. What a fast leader!

Question 38: Theyre my two sisters. They arent teachers like me.

A. Theyre my two sisters who neither are teachers like me.

B. Like me, neither of my two sisters arent teachers.

C. Theyre my two sisters, neither of whom are teachers like me.

D. Theyre my two sisters, both of those are teachers like me.

Question 39: That car is beyond my means.

B. That car is cheap enough for me to buy.

C. That car is too expensive for me to buy.

Question 40: I tried hard. I couldn’t open the door.

A. No matter how hard I tried, I couldn’t open the door.

B. Try as hard as I might, I couldn’t open the door

C. I could open the door with difficulty.

D. It is difficult for me to open the door.

Question 41: Wealthy as they were, they were far from happy.

A. Although they were wealthy, they were not happy.

B. Even if they were wealthy, they were not unhappy.

C. They were not happy as they were wealthy.

D. They were as wealthy as they were happy.

Mark the letter A, B, C, or D on your answer sheet to indicate the word that differs from the other three in the position of primary stress in each of the following questions

Mark the letter A, B, C, or D on your answer sheet to indicate the underlined part that needs correction in each of the following questions

Question 44: Actually, I strongly disapprove of your bad behave towards your parents.

Question 45: The man whom helped you yesterday is a television reporter.

Question 46: While I was working in the garden yesterday afternoon, my son is playing video games.

Mark the letter A, B, C, or D on your answer sheet to indicate the word(s) OPPOSITE in meaning to the underlined word(s) in each of the following questions

Question 47: A thrifty buyer chases fruits and vegetables in season.

Question 48: We paid through the nose to get the car fixed and it still doesnt go properly.

A. pay too much money for

C. spent too much

Mark the letter A, B, C, or D on your answer sheet to indicate the correct answer to each of the following questions

B. No, I havent tried any

C. The one I tried on first 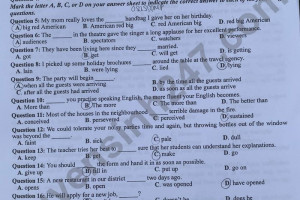 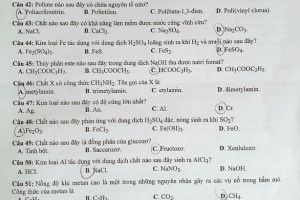 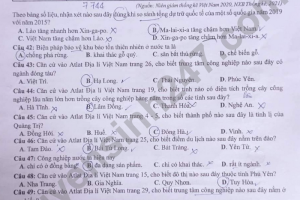 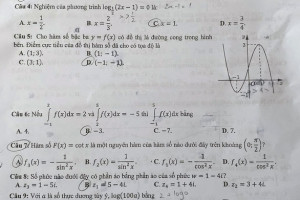